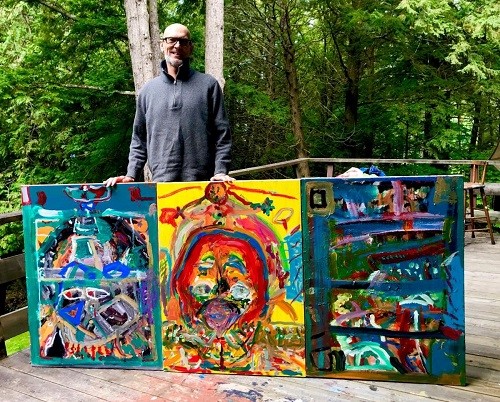 Kevin Whitaker, shown above, with “Queen’s: Before, during and after,” donated to the School of Kinesiology and Health Studies in October 2019. The paintings are hung in the quiet student lounge, KINE 207.

Queen’s: Before, during and after
This triptych of three panels represents a “moment” in the life of a Queen’s student – each moment includes the entirety of the student’s life experience – merging ‘everything’ with “now.”

Inspired by my 6 years at Queen’s, where I completed a BA-BPHE (1979) and a MA (incomplete). The triptych also represents my personal journey as the first person to attend university in my family. The paintings seek to capture the energy and dynamic tension of life before, during and after Queen’s. The panels are doors that open to life choices that may be made.

During my two years as a graduate student, under the direction of professors Hart Cantelon, Rob Beamish and Rick Gruneau, I studied the relationships between socialist realism and sport, admittedly, an esoteric area for study by eager graduate students. I later completed a law degree (Osgoode 84).

I was diagnosed, in 2015, with Parkinson’s with Lewy Body Dementia. From the outset, the lessons learned from my PHE studies have served me well. As I have navigated this disease, I have learned the value of stress management to improve physiological health. In my case, the stress management has been primarily through daily exercise, a practice I cultivated at Queen’s and have maintained since and, more recently, daily painting.

After my graduate studies at Queen’s I switched horses and pursued a legal career. For the first 16 years, I practiced labour law, in the private and public sectors. I was appointed Chair of the Ontario Labour Relations Board where I served for a decade before being appointed a judge of the Superior Court of Ontario until my resignation due to my health.

I returned to painting as a way to manage the depression and anxiety of being uprooted from my career and life plans, by a disease which is robbing me of physical and cognitive skills.