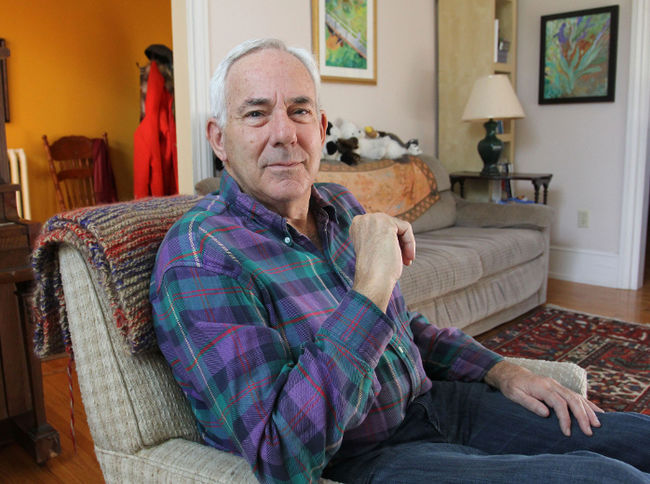 We are saddened by the loss of Geoff Smith, professor emeritus in our School, who died on Thursday, April 1st, 2021.

Dr. Geoff Smith was professor of physical and health education and of history. He taught the history and sociology of Canadian and US sport.

His research interests involved work in international relations, security issues, and interrelated cultural questions focusing on sport and issues of race and ethnicity, gender and sexuality, health and disease, economics, media, and politics. His book, To Save a Nation: American “Extremism”, the New Deal and the Coming of World War II (1973, 2nd rev. ed 1992), was nominated for a Pulitzer Prize in History.

He was an avid photographer, dog lover, gardener, knitter, and painter, and a lecturer and consultant on such issues as corporate sport, risk and awareness, and environmental issues.

The following is a tribute by his colleague and friend, Dr. Mary Louise Adams:

For those of you who never had the chance to meet him, Geoff was a historian who taught at Queen’s for 37 years. He spent most of that time in the Department of History, where he, a peace activist, and other progressive faculty were constantly embattled as they tried to make change in what was then a rigid, ‘traditional,’ old-boys department.

Geoff was a historian of the United States and U.S. sport history was one of his sidelines. He  was able to leverage that expertise as grounds for a transfer to the more collegial environment of  SKHS for the last 7 or 8 years (I’m guessing here) of his career. It was such a Geoff move – thumbing his nose at status, diving into something new, expanding his circles with new people. To say he brought something different — and unpredictable — to our students and department would be an understatement. He retired in 2006.

Geoff was an exceptional teacher and totally old school. No technology.

No learning objectives. No rubrics. He talked in full paragraphs. I can’t imagine he ever made a list of bullet points in his life.

Sometimes he played golf in the classroom or threw coins to the students or brought his dog to lecture. He expected students to challenge him. He expected them to write well. Geoff used to hold office hours late on Friday afternoons. At first I thought it was a strategy to make sure he got a quiet couple of hours to work. But, I realized he chose that time so he could focus on the students without the other distractions of the work week.  He loved office hours. He loved talking to students and many of them clearly loved talking with him. Every week there would be lines of students, sitting in the hallway, waiting for a turn to chat with him. I went to hear his last lecture. It was in KNPE 167 in Chernoff Hall. It is the only time I have seen a standing ovation in an undergraduate class.

Geoff had been in the hospital for an intestinal problem and seemed to be getting better. But his heart had other ideas.  The last couple of years had not been easy. He had been getting more fragile physically, but he was still reading and could still give you a good argument about US politics. I am glad he got to see Trump deposed.

It’s a cliche after someone dies to say they are ‘one of a kind.’ But Geoff truly was one of a kind, with his booming, cheerful voice, loyalty, openness, and intellect. The comments that are being added to his facebook page give testament to someone who could change your day with a quick (booming) hello on the street, who was a favoured professor, who was a local fixture.

Covid, of course, makes this a really difficult time for Geoff’s close ones, his friends, his kids and grand-kids and his partner Roberta Hamilton.